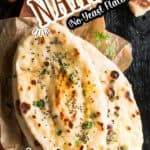 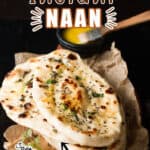 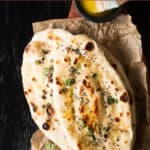 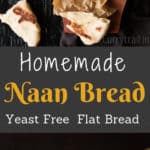 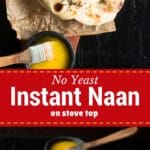 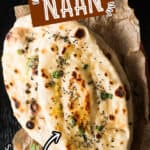 Naan recipe is Indian flatbread that is usually cooked in a tandoor oven( cylindrical clay oven). You can make restaurant style naan at home on stove, that tastes and looks absolutely delicious!

This no yeast instant naan is soft, pillow-y and easy to make! You don’t need a tandoor to have a the most delicious naand bread recipe made at home. You can achieve similar results of restaurant quality naan bread using a skillet made on stove top.

Just look at those gorgeous brown blisters on the top of the naan bread. Doesn’t it remind you of the ones you order in your favorite Indian restaurant?!

You will mostly find naan recipes made using yeast. As amazing yeast naan bread is, we are sharing with you an instant version of naan bread recipe without the use of yeast.

This recipe is easy and fail-proof and you can have your naan bread ready in very less time, whenever you get craving for naan, try this recipe!

You’ll love how soft, and pilable this flat bread turns out. It’s perfect for dunking in your favorite curry, turn it into a wrap, or use it as pizza base with your favorite topping and enjoy.

What Is Naan Bread

For those who are unfamiliar with naan, it’s Indian flat bread made of plain flour. Traditionally plain white flour is kneaded with yeast to leaven the bread. A good kneading and proving the bread overnight or couple of hours yields softer, pillowy Indian naan bread.

Once dough is proven, it’s divided into small portions, flattened and stretched. Don’t bother much about the shape of the bread. Get as rustic as you could be because Naan is rustic flat bread.  This flat bread is usually cooked in tandoor oven – a cylindrical clay oven.

While traditional naan might not be quick and involves long hours, You can make seriously good homemade naan without much sweat! It’s fast and easy to make.

This version of easy homemade naan needs a cast iron pan and stove. And made without yeast. So no waiting for hours for dough to prove.

This instant naan recipe made without yeast gives you soft, puffy, pillow-y bread with beautiful brown blisters.  You see you can’t go wrong with flat breads, it’s that easy to make.  We have a step-by-step photos to help you go make the BEST homemade naan easily in your kitchen

This no yeast instant naan is guaranteed to be as good as you get in restaurants. It’s soft, pillow-y and is made without yeast. It’s made on a griddle on stove top.

There are many variations of naan bread recipe. In some there is eggs and milk, some has yeast and yogurt, others call for baking soda, milk and eggs. This recipe is about yeast free instant naan made with a mix of whole wheat flour and plain flour.

Plain and simple – Salt and sugar might be simplest flavoring that you can add to naan bread.

More interesting flavor toppings that can take your naan bread to another level are:

Garlic Butter – anything and everything tastes great with garlic butter.

Nigella and sesame seeds – talk about giving naan a fancy look, a mix of nigella seeds and sesame seeds does the magic. Sprinkle some chopped coriander leaves along with it on top to make it more pretty! Plus the added nutty flavor from the seeds is so DAMN GOOD!

No matter what flavor topping you choose, make sure to finish off with a  good dollop of ghee brushed over hot naan bread. If you don’t have ghee, use unsalted butter. Just make sure not to skip this step.

How to Make Naan Recipe Without Yeast

This homemade easy and fast naan recipe has a mix of whole wheat flour and plain white flour. In a bowl add flour, salt, sugar, baking soda, oil and mix well. Make a well in the center pour yogurt into it. Yogurt along with baking soda acts as raising agent. This is what gives you pillow-y naan.

With the use of baking soda, you don’t need to leave the dough to prove for hours. After a mere 15 to 30 minutes it’s ready to shape.

Knead all ingredients into smooth dough. Add water if needed. The dough will be soft and sticky. Do not be tempted to add more flour. Rub oil all over the dough, cover and let it rest for about 30 minutes.

Cook it on Stove –

Rub water over the rolled dough on both sides, and if you prefer to add any toppings, sprinkle it now.

Place the rolled dough over a hot tawa/griddle with the side sprinkled on top facing up. Cover and cook for about a minute on medium low flame. Then turn it over and cook on other side for another 30 seconds.

Once done remove from tawa and rub with some fresh homemade ghee. Repeat with rest of the dough.

Make a well in the center and all curd and knead into smooth dough. Add water if needed. The dough will be soft and sticky. Do not be tempted to add more flour. Rub oil all over the dough, cover and let it rest for about 30 minutes.

Divide the dough into 6-8 equal parts. Dust a little flour if needed to roll and shape into flat bread using rolling pin or just by hands.

Rub water over the rolled dough on both sides and if you prefer to add any toppings you can add at this stage.

Place the rolled dough over a hot griddle with the side sprinkled with topping facing up.

Cover and cook for about a minute on medium low flame.

Then turn it over and cook on other side for another 30 seconds.

Once done remove from heat and rub ghee or butter over hot naan bread.

Repeat with rest of the dough.

Can You Freeze Naan Bread

Yes you can cook homemade naan bread and freeze it for up to 2 months in freezer. To stock up naan in freezer, layer naan one top of another with parchment paper between them so the bread does not stick to one another. Take the stack of naan and place it in zip lock bag. Just before locking the zip lock bag, push out all air, lock it tight and store in freezer.

How To Reheat Frozen Naan

Oven – Sprinkle water on both sides of frozen naan. Place frozen naan on baking tray. Reheat oven to 400 F. Reheat naan in pre-heated oven for 4 minutes. If you do not sprinkle enough water over frozen naan, re-heating it in oven will turn it dry and crispy on both side.

Note – if you over heat naan, moisture from it will evaporate and cook the starch in the naan, making it rubbery.  DO NOT OVER HEAT NAAN.

Microwave – Depending on your microwave and the size of naan, the time to re-heat naan in microwave will vary. Microwave frozen naan directly for about 30 to 90 seconds.

Pro-Tip : Place a small bowl of water next to naan inside the microwave. This will prevent naan from turning crisp and hard.

Stove – Heat non-stick skillet on medium heat. Place frozen naan over hot skillet and cook it for about a minute of two moving it around. Turn over and repeat. Apply pressure while cooking naan.

How To Serve Homemade Naan

The possibilities are endless on what to serve naan with and how to serve it. This soft, pillow-y bread has so many great ways to be served. It’s perfect for dunking in your favorite curry, see below for all the curries with which naan recipe can be paired with. Turn it into a wrap, or use it as pizza base with your favorite topping and enjoy. I also love to spread creamy smooth hummus over naan and top it with my favorite toppings like grilled shrimps, tandoori chicken, or just avocado and eggs!

DID YOU LOVE THIS NAAN RECIPE? CHECK OUT OTHER VERSIONS OF NAAN TOO BEFORE YOU GO-

Don’t forget to Subscribe to CurryTrail  Recipes below to get our newest recipes delivered straight to your inbox.

Nutrition mentioned below is for one single naan bread. Depending on the size of naan bread, the calculation can vary. Please keep in mind that nutritional information provided is only a rough estimate and can vary greatly based on products used.